A very successful 34th DAI Tournament and banquet held on June 9th at the Rossmoor Creekside Golf Course and banquet facility.  Ken Main did a great job organizing and coordinating this very wonderful event.  Ken and his committee of Frank Kilarr, Ray de Wit and Mike Frey did a superb job.  The day started with a highly challenging Putting Contest organized by Phil Philpot.   The Putting Event was won by: George Vogt.  Other contest winners included: Longest Drive: Gary Nicholson; Closest to the Pin: Frank Kilarr; Individual Low Gross: – Steve Schramm; Women – Margaret Batesol; Individual Low Net – 1st -Mike Frey, 2nd – Bud Grisanti, 3rd – Jack Schweitzer.  9 guests joined the 27 golfers and the 36 of us enjoyed a wonderful time of socialization and dinner.  Prior the wonderful meal catered by Simple Elegance, Ken Main and Ray de Wit recognized the contest winners and held a raffle for various items which were donated people/organizations including: Rocco’s Pizza, Muscardini Winery, Rossmoor Golf Course, Diablo Hills Golf Course and Boundary Oak Golf Course.  A great time was had by all !!!  Plan to join us for the 35th Annual DAI Tournament to be held in mid-2023 !!

Following a photo collage from the event… 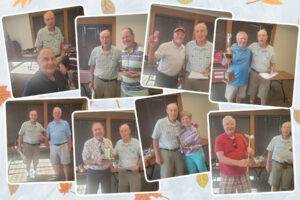 Following are a few photos from the event… 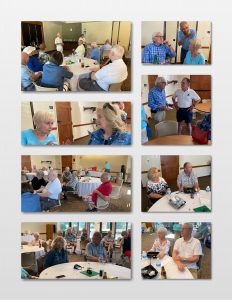 The 32nd Don Atwater Invitational held at Diablo Hills Golf Course was a huge success.   Frank Kilarr organized a highly challenging Putting Contest which was won by: Men – Rich Knowles and Women – Millie Hersch.  Other contest winners included: Longest Drive: Men – Rich Knowles; Women – Sue Derby; Closest to the Pin on #4: Men – Stan Johnson; Closest to the Pin #7 (2nd Shot): Men – Ken Main; Women – Sue Derby; Individual Low Gross – Rich Knowles; Team Low Net – Tom Kerns, Mike Anderson, Glenn Gilman and Mike Frey.  The 26 participants were joined by guests and the 34 of us enjoyed a wonderful time of socialization and dinner.  Following the wonderful meal at The Greenery Restaurant, Phil Philpot and Frank Kilarr recognized the contest winners and held a raffle for various items which were donated people/organizations including First Tee, Dick’s Sporting Goods and Sharon Brown.  It was a great time…plan to join us for the 33rd Annual  Tournament in June 2020; put it on your calendar now !!

Following are a few photos from the even 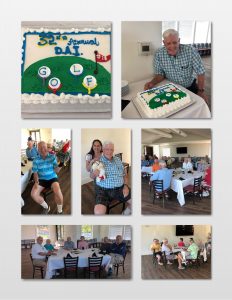 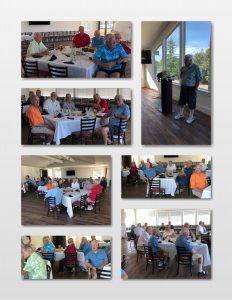 What is a “DAI” one might ask? Because you did, here is the information to enlighten you as reprinted from the original author, Don Atwater.

As Don’s 27th Annual Invitational Golf Tournament was the last event, let me share some history with you. First year was 1986, my first year as a single man. At the time I had been following another golf tournament called a “clambake”. I decided if Bing Crosby can have his own golf tournament, then so can Don Atwater. I liked Bing’s location, but it was difficult to reserve a starting time at Pebble Beach for nine holes. But we did find a course a few miles away loaded with ice plant and a million-dollar view called Pacific Grove Municipal Golf Course. Golf tournaments require planning and since my request for reservation six months in advance was denied, a few of us got on the phone at 6:00 AM a week before we planned to arrive. Three foursomes, including those of us who brought a lady golfer made the first tournament. Having ladies participate or at least travel with us was a winning decision.

1987 a few friends followed me to Brooktrails near Willits for the first annual golf tournament. Getting away in the early days had its appeal, so some tournaments were held some distance away from home. They included, Wawona in Yosemite Park, Nevada County in Grass Valley, Deep Cliff in Cupertino, Golden Gate Park in San Francisco, Valley Gardens in Scotts Valley, Sebastopol GC in Sebastopol, Benbow Inn in Garberville, Northwood at Rio Nido, and Forest Meadows in Murphy’s. We made a return to Pacific Grove for our 10th annual. It was in 1999 that this tournament included a few of my new SIR friends in Branch 8 and probably in the last 10 years included only SIR members and their spouses/friends.

I’m not sure I’d call this an ego trip as many hours were put into planning and organizing these events. However, I found pleasure in having many friends assist in various ways. And I enjoyed playing with the golf rules in an attempt to make the games more equitable for golfers less talented than others. Team play, putting contest, ladies’ participation, picnic lunches and other activities hopefully added interest to the event.

Knowing that the NINE HOLE GOLF group of SIR Branch8 will carry on with this tournament in the years to come is satisfying and gratifying. I’m looking forward to being a participant and enjoying the camaraderie with SIR friend and guest that have made this tournament a favorite.

Below is a recap of the tournaments and champions since SIR Branch 8 members started attending.  Reply if any clarification on any of the data is desired. And thanks for being a participant this year.

A RECAP OF THE ANNUAL TOURNAMENT WITH MEMBERS OF SIR BRANCH 8.